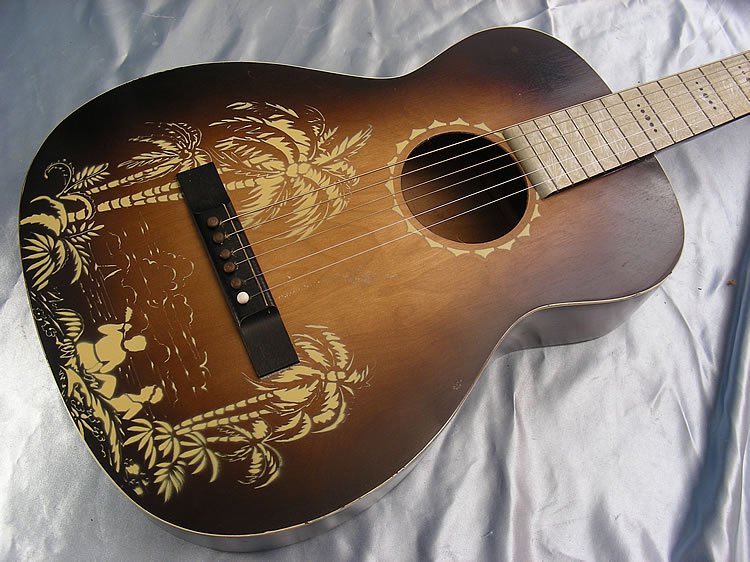 For many years Ki Ho’alu (Hawaiian Slack Key Guitar) has been passed down from father to son in a way that is typical for Island folks. When the house is quiet and the days’ work is done, the father takes his old guitar out of its battered case. Moving to the back porch, he finds a favorite chair, stretches out his tired legs, and cradles the instrument gently in his arms. At his feet, a young boys’ face lights up in wonder as a sweet sounding melody fills the warm evening.

I began to hear that beautiful whispering when I was about 9 years old. We were at a family gathering in Nu’uanu and as the sky turned orange-red, there was a kind of magic in the air. Something wonderful was going to happen. I followed a small path that wandered beneath the mango trees and as I walked, the air overflowed with the sweet scent of jasmine. I paused for a moment to look at the fading light through the trees, when I first heard the music that whispered. It was flowing in the cool air, drifting down through the mango leaves.

At first, I couldn’t believe it. What was this sweet sound? I searched for the source of the music and in a clearing beneath the faintest of stars, I saw an old man playing a guitar. He was making the most beautiful music I had ever heard. Taken by the flow of the rhythm, the old man had closed his eyes. I approached slowly, entranced by the music and as I sat down, I made a small rustling sound in the dirt. The old man opened his eyes and a puzzled expression came over him. In the dim light, I felt his eyes searching my face as I sat there quietly at his feet.

He hesitated for a second. Then abruptly, the old man stopped playing and coldly turned his back to me.

On that warm evening, the stars continued to glow, the ripe mangoes still hung from the trees, but the beautiful whispering music was gone. In the first rush of that silence, I looked at the old mans back and felt something leave my heart. I was too young to know it then, but I understand it now. The bitter disappointment, the thickness in the throat, the aching in the chest. The old man had broken my heart.

I found out later that because I was not a member of his ‘ohana (family), there was no way on earth that he would share his music with me. I was to be left outside. Outside in a world without the whispering.

I was just a boy, and it was a difficult moment for me that evening, yet the sweetness of the music seemed to have found its way into my heart. It began to change me somehow. As the years went by I worked hard to understand the nature of Ki Ho’alu and my path expanded beyond my youthful dreams. My world began to change. It wasn’t always for the better. Over time, those beautiful old mango trees were cut down and the soft rustle of an evening breeze transposed to the roar of jet engines.

Recently I sat with my wife in an airplane, and I wondered what I was looking for. I wondered if my whole life has been about trying to find that same, stubborn old man. To sit at his feet, to pry open his heart. To study carefully the movements of those gnarled hands on the shining, singing strings.

I marveled at how that evening of so many years ago had changed the outcome of my life. Are we all this vulnerable? Do such small moments in time irretrievably change the future? I closed my eyes, determined to re-trace my steps beneath those ancient trees and at first, I had trouble quieting my thoughts. After awhile, I begin to feel a mysterious resolving power, some precision beyond memory. I recalled hearing the first, faint notes of the old man’s guitar and I moved backwards in time. I saw the blades of grass in that bountiful twilight and a river of red earth beneath my bare feet. What a beautiful gift this journey has been, I thought as I settled back in my seat and drifted down through the music.

Recently, I was given a grant by the Hawaii State Foundation for Culture and the Arts to teach an apprentice. I wasn’t quite sure where to start, but I had heard of a young man who played guitar and made his living from a pink lunch wagon. He lives a simple life, waking up early to make chicken and noodles. The young man is a good cook, but when I heard him play, I knew that his real love in this world was for a special music. 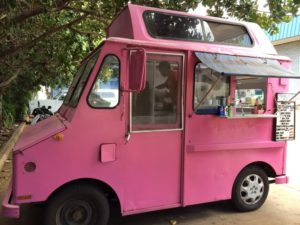 Nobu Yoshida has been a student of Keola  for over 25 years.

Nobu became my apprentice, but something in my heart told me that he was here to teach me something. He has come into my life for a purpose that I can’t quite figure out.

We walk down by the park listening to the sound of the wind and we talk about music and how it changes peoples lives. I sit on a bench with my guitar, the young man sits in the grass at my feet. I look in his eyes and I see how earnest he is, how important it is to him, this time that we spend together.

I really don’t mind being here too much. The gift he has brought me is more valuable than I expected. It is the quality of hope in his heart. He yearns to make the music that whispers.

It is getting late. I am feeling old and tired. HE is not of my family. He is not of my own race. I study his face for a long time and I remember an evening so many years ago.

My guitar sings, as the evening light floods the valley.

An edited version of this story (@500 words) was published in the Honolulu Advertiser / Readers Journal on Wednesday, September 15, 1999