Aloha Kuamo‘o ‘Āina (AKA) and The Trust for Public Land announced today that they have successfully acquired the ancient Kuamo‘o battlefield and burial grounds on Hawai‘i Island south of Kona, 47 acres of makai land that is rich in history, cultural treasures, burial sites, and a portion of the Ala Kahakai National Historic Trail. Keola Beamer, President of AKA, which now owns and will steward the land, said, “Mahalo to all who made this possible, especially the landowners, the Schattauer ʻOhana, and Aunty Margaret Schattauer, who waited patiently for us to raise the funds needed, sold the land at a substantial discount, and is making a major donation to AKA for stewardship of these lands. We look forward to working with descendants of the battle and the Kona community to restore and protect this special place.” AKA envisions a restored landscape that will be a catalyst for meaningful learning through place based education that will help to achieve justice and peace for Hawai‘i’s people, environment, and the world.

The landowner, Mrs. Margaret “Possum” Schattauer, 88‐years old, is happy that the history of these lands will be honored in perpetuity, saying “There is so much important history at Kuamo’o. I have always wanted this to be preserved and shared. I am so very glad that Trust for Public Land and Aloha Kuamo‘o ‘Āina have helped secure a good future for these precious lands and I strongly support Aloha Kuamo‘o ‘Āina’s vision and plans to share the importance of this ‘āina for many generations to come.”

Lea Hong, The Trust for Public Land’s State Director, said, “Mahalo to all of the many individuals, agency staff, and organizations that contributed to the protection of this land, including the State Legacy Land Conservation Program, the Office of Hawaiian Affairs, the Dorrance Family Foundation, the Atherton Family Foundation, Big Island Toyota and the De Luz Family, KTA Super Stores and the Taniguchi Family , the Cooke Foundation, Hokuli‘a Community Fund, the Keauhou Canoe Club, and so many more who made the conservation effort possible.”

“The State Department of Land and Natural Resources Legacy Land Conservation Program, funded by 10% of the real estate conveyance tax, has protected over 22,000 acres in 23 projects, including culturally significant sites like Kuamoʻo, and native forests and watersheds, white sand beaches, and ranching and agricultural land.

“This is an important and successful program that has helped to conserve the special places of Hawaiʻi,” said Suzanne Case, Director of the Department of Land and Natural Resources.

To learn more about the history of Kuamo‘o and make a gift to support future stewardship and the costs associated with this project, visit www.Kuamoo.org. Checks can be made payable to Aloha Kuamoʻo ʻĀina and mailed P.O. Box 10784, Lahaina, HI 96761 Call (808) 640-2797 for more information.

About the Battle of Kuamo‘o

In the 1819 Battle of Kuamo‘o, Hawaiian forces clashed over the traditional kapu religious system. The dispute pitted the forces of Kekuaokalani, nephew of Kamehameha I, who sought to preserve the traditional system, against his cousin, Liholiho (Kamehameha II), who had abandoned the kapu system. Liholiho was victorious, but many warriors from both sides perished in battle and were buried on the property, including Kekuaokalani and his wife, Chiefess Manono. With her dying breath, Chiefess Manono is said to have uttered “Mālama kō aloha”‐ “keep your love”‐ a plea to both sides that no matter what obstacles come to Hawai‘i, keep your love of one another.

Aloha Kuamo‘o ‘Āina (AKA) is a Hawai‘i Island based nonprofit, founded by the Beamer ‘Ohana and headed by Keola Beamer. AKA is a Hawai‘i center for cultural and ecological peace, with a mission to promote aloha ‘āina as consistent with the mo‘olelo (stories) and values of Kuamo‘o to achieve justice and peace for Hawai‘i’s people, environment, and the world. After the property is secured, AKA plans to engage the community to help steward the land and create a vision for its future.

About The Trust for Public Land

Campaign to Save the Kuamo‘o Battlefield and Burial Grounds

Mahalo to the following supporters of the effort to turn this former place of war into a place of peace, hope, and reconciliation. (As of 12/30/15) 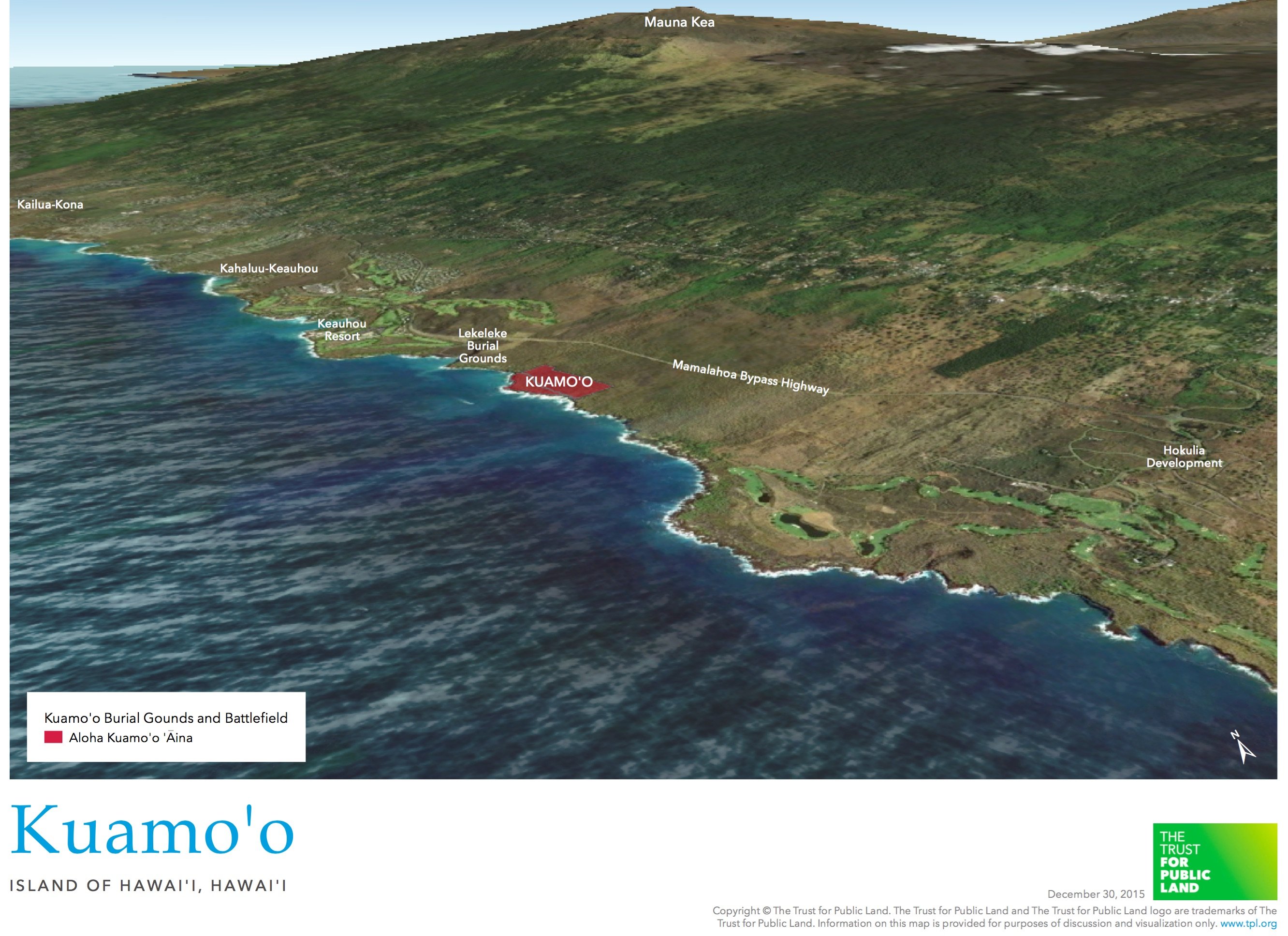 View the map in a larger size here.